Long Beach, CA – April 20, 2015 – The Always Evolving / Replay XD / Megan Racing Chevrolet Camaro was extremely impressive on Saturday night in the hands of Conrad Grunewald to take the Formula DRIFT driver all the way to the winner’s podium.

The action got underway beneath the lights Friday evening on the streets along the Pacific Ocean as part of the Toyota Grand Prix of Long Beach. After a short practice session, Grunewald qualified fourth and was paired to battle with Dean Kearney and his Dodge Viper in the Top 16. Grunewald drove a well-balanced set of tandem drift runs to beat Kearney and set the path to dominate all the way to the finish.

In the next match-up Grunewald and his No. 77 Always Evolving / Replay XD / Megan Racing Chevrolet faced Charles Ng. Grunewald lead the first run with a strong showing while Ng, piloting an Infiniti G37, followed in tandem. Immediately after the lead run, Ng reported a mechanical issue and was not able to make it to the line for the second battle and that gave way for the Camaro to advance on to the next round.

The action heated up in the Final Four elimination round where Conrad Grunewald faced up against Forrest Wang. Grunewald succeeded in executing both smooth and aggressive drifting lines and was one of the fastest cars of the night. Wang’s drift car, an S14, experienced technical problems and was not able to run and complete the battle that went into a one-more-time tiebreaker. Grunewald advanced to the final with the solid performance of his Chevrolet Camaro, which is built by and supported by BRE Motorsports.

In the Final of the KMC Super Drift Challenge, the stage was set for Grunewald to face Robbie Nishida driving the Lexus SC300 for a USA vs. Japan feature showdown. On the first run Grunewald lead and Nishida made a correction mistake in the hairpin while it was perfection and solid execution from Grunewald’s run. The second tandem had Grunewald taking chase and it was enough to impress the judges and give CGR its first win of the season.

“My Chevrolet Camaro was so on point with power and reliability tonight,” Grunewald said after the event. “Thank you to Always Evolving, Replay XD, Megan Racing, Chevrolet Performance, GT Radial, Top 1 Oil, SDPC, MAHLE, ADV.1 and everyone that supports and helps this team. It’s an honor to deliver a win at Long Beach to our partners.” 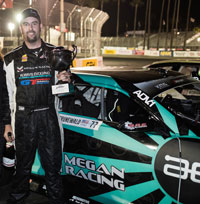 The next stop on the Formula DRIFT Championship schedule rolls into Road Atlanta May 8-9 for Round 2 on the season calendar. Tickets are available now and can be purchased at www.formuladrift.com.